Planning a family vacation to Buena Park, CA? Medieval Times Buena Park location is a common tourist attraction. Here’s what you need to know before the show. 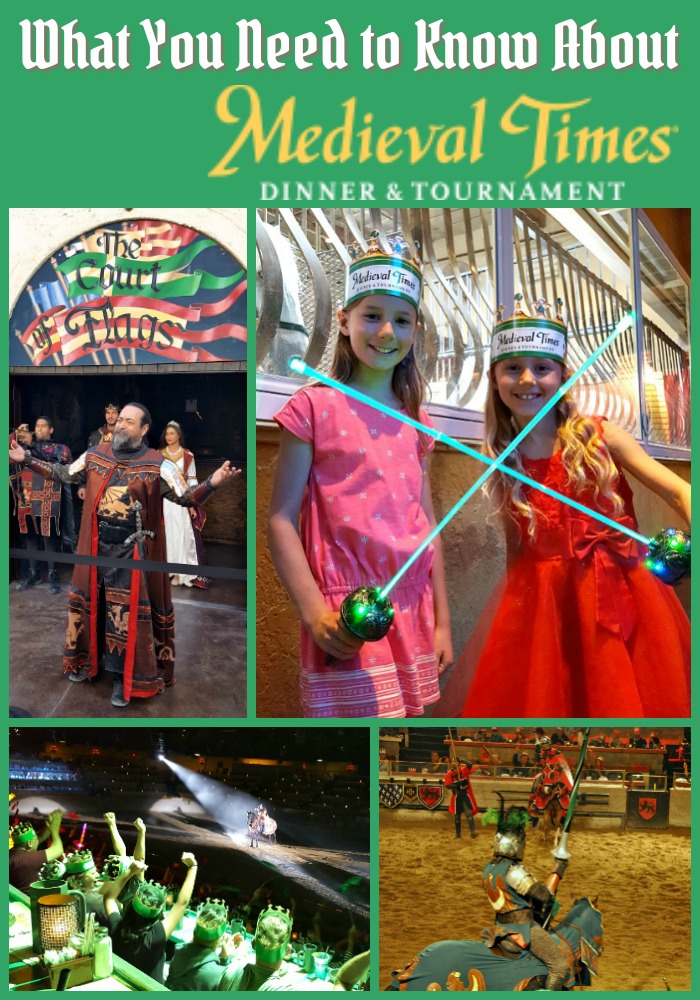 Last November, my family and I had the opportunity to see the Pirate’s Dinner Adventure show in Buena Park, CA. We had the greatest time at that show, so we vowed the next time we were in Buena Park we’d check out the Medieval Times dinner show.

Medieval Times Buena Park was kind enough to provide my family with tickets so we could see what the show was all about. We checked them out the night before Knott’s Soak City opened for the season and it was a sold-out show.

Both the Pirate’s Dinner Adventure and Medieval Times Buena Park shows have a similar concept. A themed dinner with a show where the audience is encouraged to cheer on their “team.”

There are some definite differences, though, that I’d like to share with you. Overall, we preferred the Pirate’s Dinner Adventure show over Medieval Times Buena Park. It was more interactive and more intimate.

But that doesn’t mean you should take a pass on Medieval Times Buena Park. There is still a lot of fun to be had for families who love everything about the Medieval Period or the Renaissance. 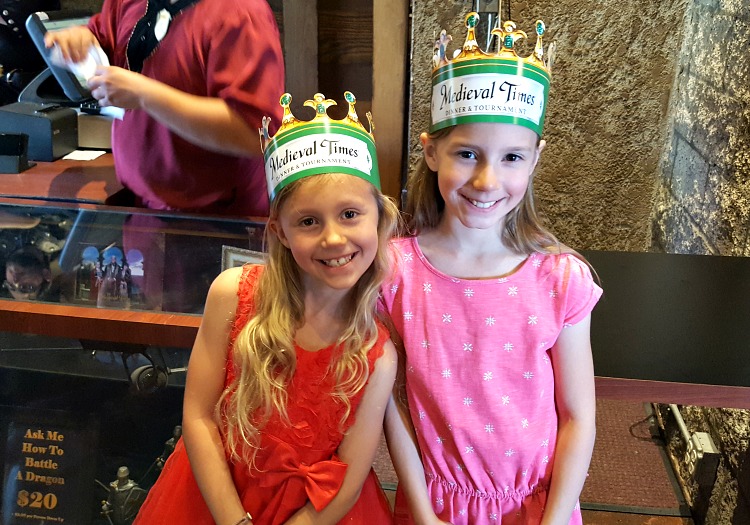 If you’ll be visiting Southern California and are searching for great family friendly activities, here is what you need to know about Medieval Times in Buena Park, CA. I haven’t been to the other shows’ locations, but I assume the setup is the same as the Buena Park location.

If you check out the Medieval Times website, you’ll see that there are different levels of tickets. The only differences we could decipher is that you get to sit a little closer and receive a souvenir towel when you pay the upgrade fee.

There was also a separate VIP line from the general admission line for the castle you will be visiting. The length of both lines was about the same. 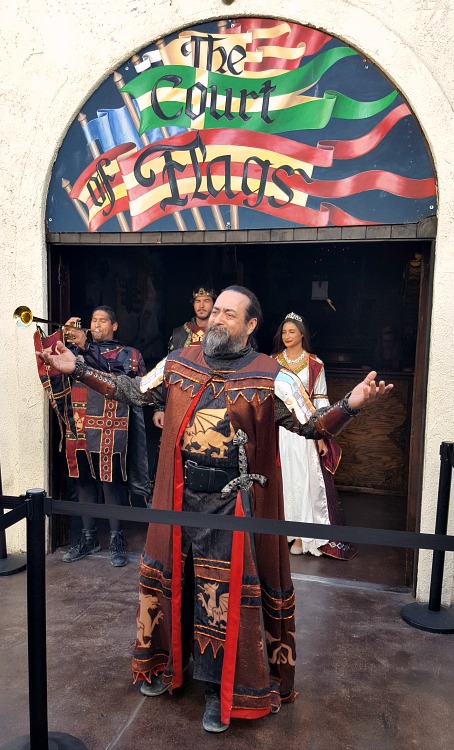 We decided we were perfectly happy sitting in the general admission area. Once inside, we didn’t see much of a difference in any of the seats, so we were happy with that choice.

The first thing you’ll notice after you enter the Medieval Times castle is that there is a bounty of souvenirs to choose from. You’re immediately offered photo packages (which we took advantage of – it was fun!).

You can get any drink you want in a souvenir cup, and then you can walk over to the shopping area where the rest of the souvenirs are found. The girls immediately honed in on light-up fencing swords since they just learned the basics of fencing at Girl Scout Camp. 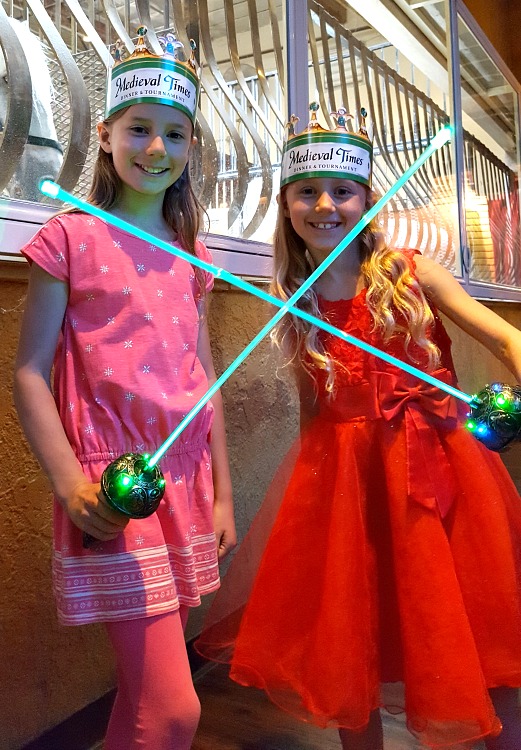 They had an absolute blast playing with their swords while we looked at the rest of the souvenirs. Hats, t-shirts, knick-knacks and anything you could think of were to be found. I was really impressed with the huge selection of themed souvenirs.

There was even a bit of a show going on in the waiting area to set up the story for the dinner show. 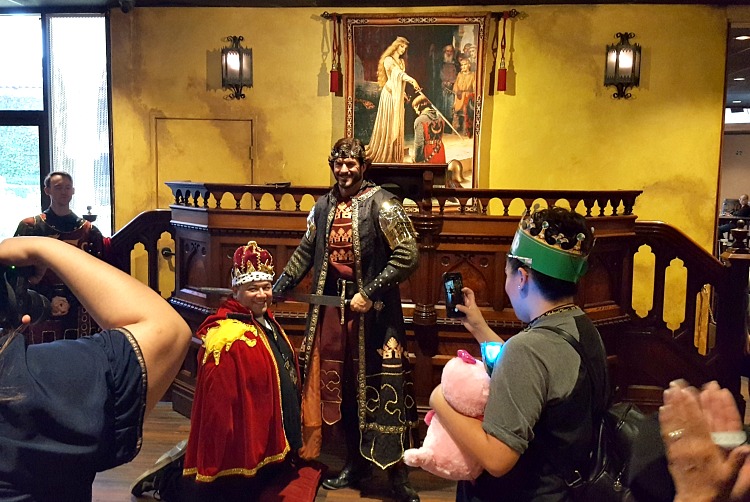 The seating is long rows of seats, with long narrow tables. It a lot tighter than I was expecting. We were really squished in there, and we ended up in the middle section, so it’s good no one had to use the restroom during the show.

In case you wind up squished in the middle too, make sure your kiddos use the bathroom before sitting down in the arena. It would be really difficult to get them out during the show.

After you get seated, the server comes around to hand you the menu and ask you about any food allergies. Zoë can’t have corn or tomatoes, and I can’t eat gluten, so we let them know about that.

They brought Zoë hummus and veggies instead of the tomato soup and gave her an extra potato instead of corn on the cob. For me, they just omitted giving me garlic bread and brought me fruit for dessert.

It was a large, filling meal that you have to eat with your fingers – no silverware allowed. It included tomato soup, corn on the cob, half of a potato, chicken, garlic bread and dessert. The food was okay, definitely bulk catering style.

During the show, one server is in charge of a large area. He or she will bring each course of your meal to you (they serve one item at a time).

Your server, however, does not bring drinks from the bar. Someone from the bar staff has to take those orders.

We found it quite difficult to get drinks brought to us during the show, so I highly recommend getting all of the drinks (other than what is included) you think you’ll want at the bar before the show.

The Medieval Times dinner show is pretty much what you’d expect. Lots of sword fighting and jousting and proclamations from the King and Queen. 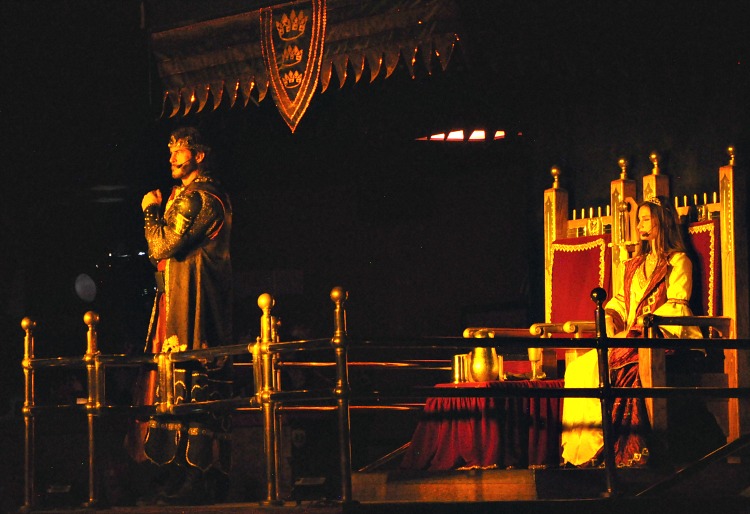 Everyone is seated in a different “color” area. We were in the Green section, so we cheered on the Green Knight. There were a lot of different sections, and you’re told who your rival sections are, but it’s hard to keep that straight! 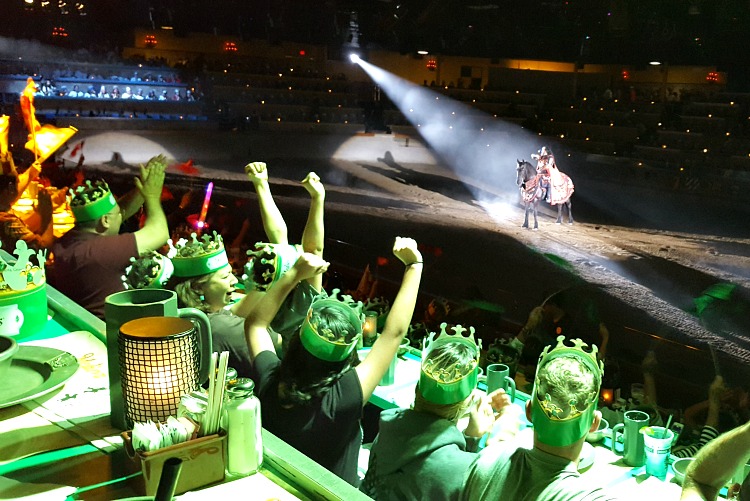 The show starts out pretty slow, setting up the story. But then the jousting and sword fighting starts, and it gets a bit more interesting. 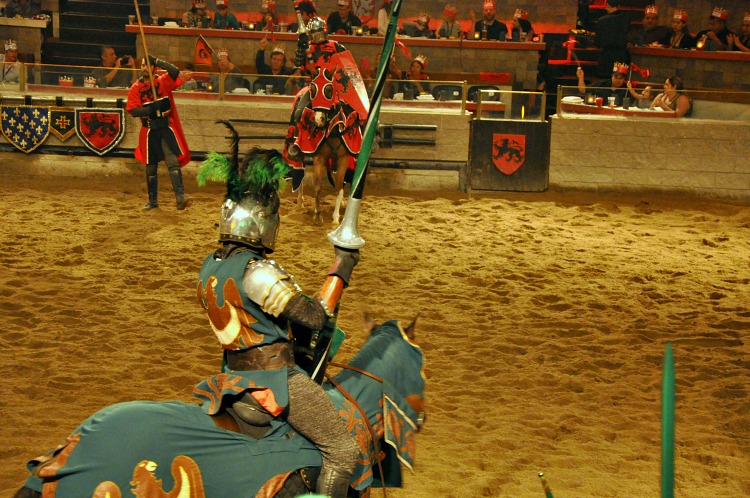 There wasn’t any audience involvement like there was with Pirate’s Dinner Adventure. I think that was pretty disappointing for the girls, but I can understand why they can’t bring the audience into this show. 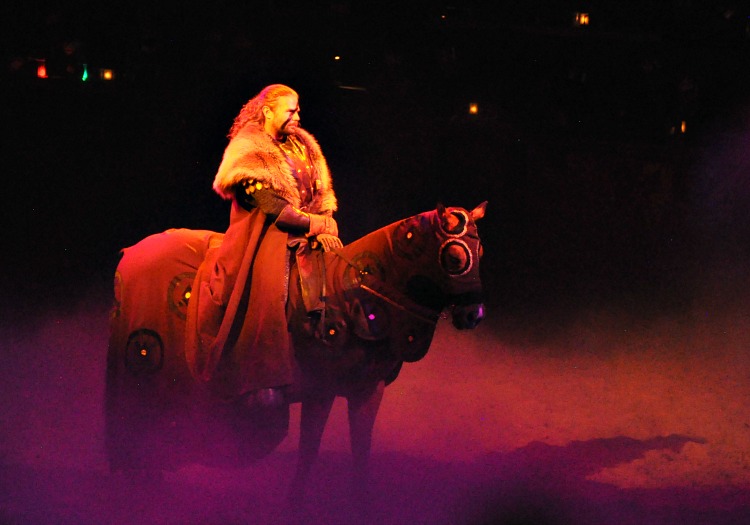 A large net is also pulled up around the arena to protect the audience from flying swords, shield and other props. Again, I totally understand the need for the safety net, but it took away from the show. It definitely makes the audience feel separated from what is going on in the show. 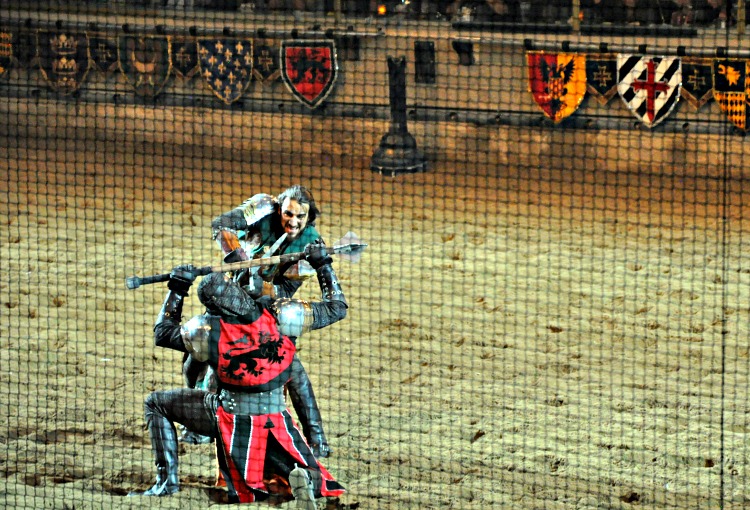 However, it was still fun and we enjoyed the show. If we hadn’t seen Pirate’s Dinner Adventure first, we probably would have enjoyed it more. For dates, times and tickets, visit the Medieval Times website. Promotions may differ at each castle.