Home » Adventures » A Rich History: Hofsas House in Carmel by the Sea

Are you looking for a hotel in Carmel by the Sea that’s rich in history? Hofsas House is the place you want to stay! Read about the history of Hofsas House. 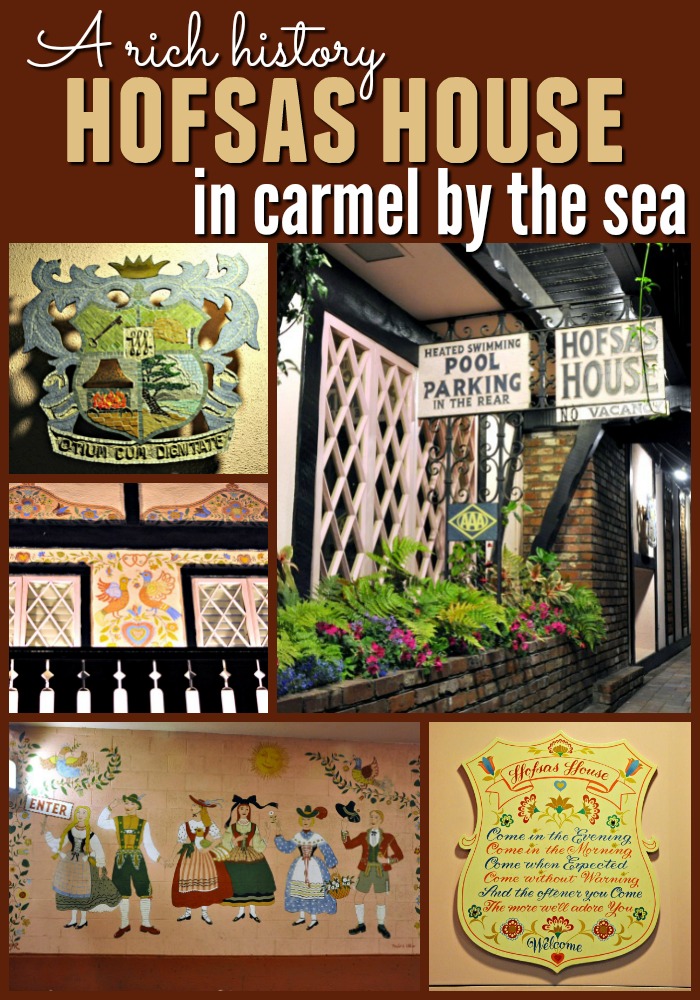 Carmel by the Sea was incorporated and officially made into a town 100 years ago on October 31, 1916. Carmel was founded by artists, poets and people of the arts, which makes for an eclectic town unlike any other.

I was stationed next door to Carmel in Monterey 20 years ago. During the summer, it seemed like a group of us Marines would spend practically every weekend driving to Carmel, enjoying the amazingly beautiful beach.

Carmel Beach overlooks Pebble Beach Golf Course and you can see Asilomar Beach Drive in Pacific Grove from it as well. The view is simply amazing!

I was beyond super stoked when we were invited to stay at the Hofsas House Hotel in Carmel by the Sea, California. It ended up working out in concert with our Santa Barbara wine tasting trip too, so the timing was perfect. 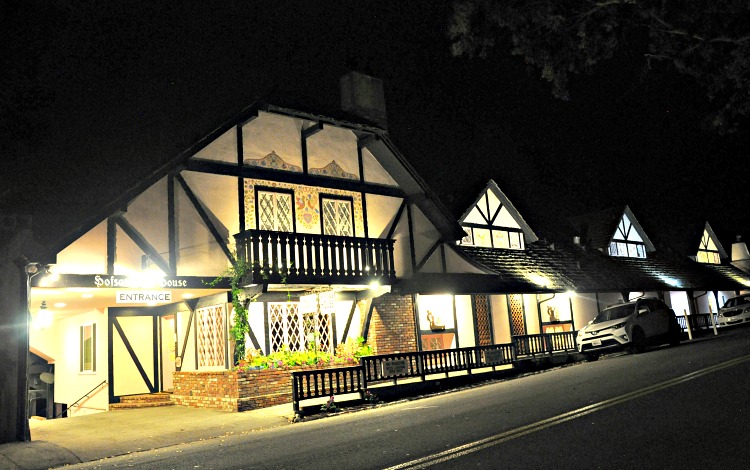 I’m a bit of a history buff. I love researching history and the history of the Hofsas House Hotel in Carmel by the Sea is pretty neat.

The hotel was founded by Donna Hofsas in 1947. Her husband Fred was an accountant and they bought four small cottages on the parcel where they all still sit in the center of the property today. While her husband was at work, Donna rented out three of the cottages and took care of her guests like they were family.

In 1957, she had 25 rooms added on along with the swimming pool and she ran the place like a traditional Bavarian Inn. Fred was also an artist and a photographer and he designed and made the two mosaic coat of arms in front of the hotel. 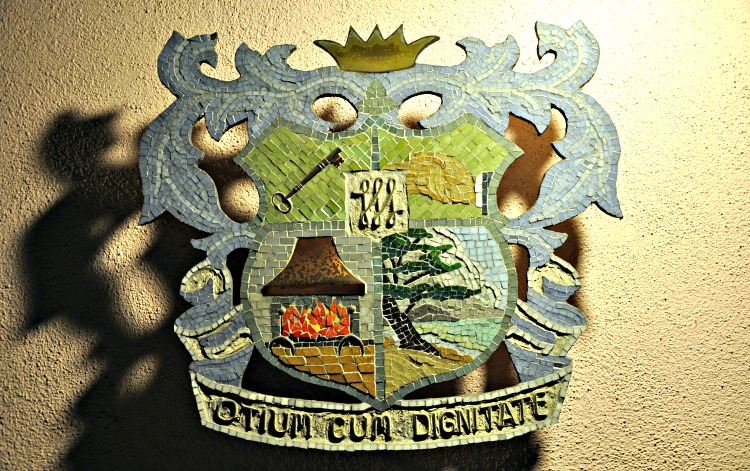 Donna was also friends with the famous muralist Maxine Arbo and commissioned Maxine to do the Mural at the entrance to the Hofsas House preceding Maxine’s death in 1966.

This mural is a piece of art history, and because of the careful planning of its location, the mural has never had a drop of sun touch it. And even though it’s had a couple of minor touch ups over the years, it looks magnificent. 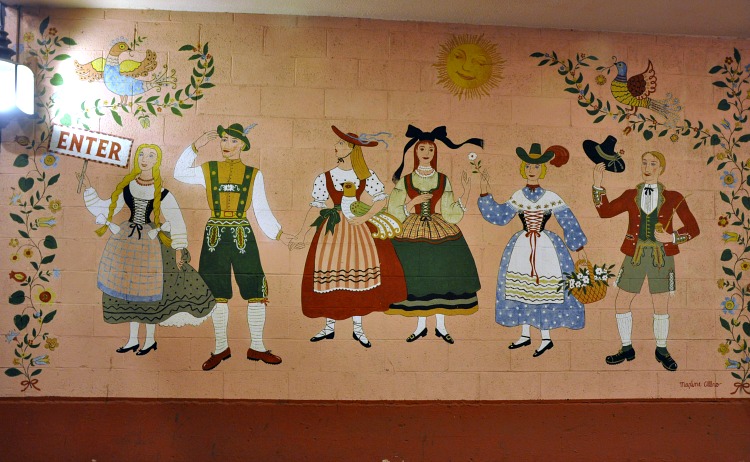 Then in the 1960s, Donna liberated herself from her husband and she kept the Hosfas House Hotel in Carmel going strong.

What’s very interesting is that Carmel has a ton of interesting laws and ordinances. For example, it’s against the law to wear high heels in Carmel and it’s also against the law to eat ice cream on the street. An ordinance from long ago said no buildings taller than 2 stories were to be permitted in Carmel. Well, Donna was reportedly a very strong willed woman and she got her way. 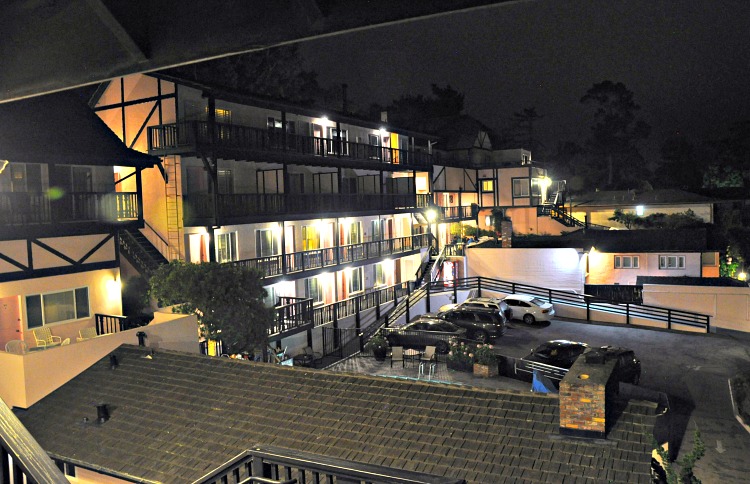 Donna brought up her only son Jack in the hotel, and he learned the business from his mom. Eventually, Jack and his wife Doris took over the hotel when Donna passed in 1981 after dedicating 34 years of her life to treating strangers like family.

Jack and Doris brought their children Scott and Carrie up in the hotel in the same fashion, with young Scott and young Carrie helping guests to their rooms. By the age of 12, young Carrie was running the front desk and learning the hotel business inside and out.

When Jack passed in 1996, Scott and his mom Doris took over the hotel and ran it, maintaining the highest level of customer service. During this time, Carrie went away to college and pursed other careers, but she and her grandmother were very close to each other.

So when Scott and Doris decided they were done running the Hofsas House, they looked to Carrie. Carrie wanted to preserve the family legacy of treating strangers like family and all of the history of the Hofsas House. She moved home and took the role as co-owner/ General Manager in 2000 and has been running Hofsas House Hotel in Carmel in their proud family tradition ever since. 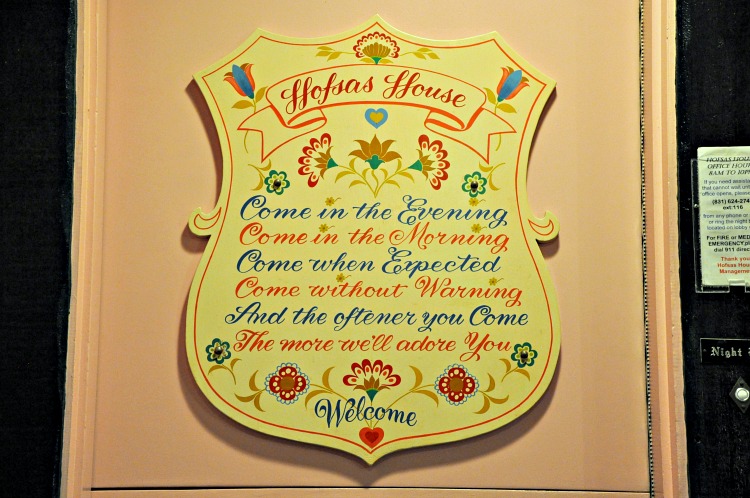 Carrie Theis was a wonderful hostess and we had the pleasure of meeting Doris too. They’re good people. The entire staff at the Hofsas House Hotel in Carmel by the Sea was outstanding.

I’ll tell all about our stay at the Hofsas House in the next post.