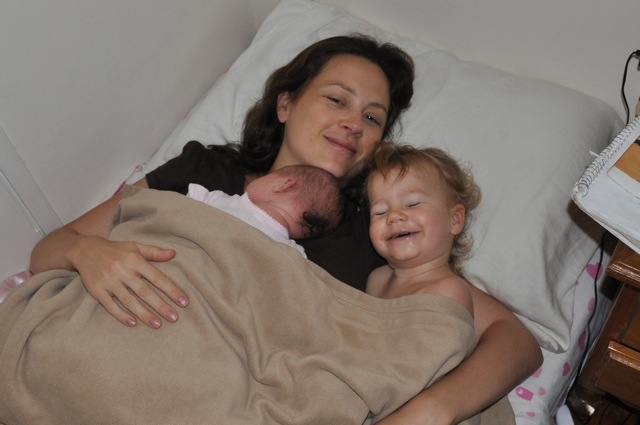 I can sum up the lesson in one word: Flexibility.

Over the last two months, we have slept in so many different arrangements:

When we brought Kaylee home from the hospital, we set Zoë’s twin mattress up in our room. We thought that would be the best transition since she had been sleeping with us.

While she was initially excited by the idea, she wanted nothing to do with sleeping in that bed. Sometimes she would fall asleep and we’d put her in it, but as soon as she woke up she’d insist upon coming into our bed.

We gave up hope that she’d want to sleep in her bed knowing that Kaylee was in ours (i.e., taking her place in our bed). So, the bed went back to Zoë’s room.

At that point, we’d start the night with Zoë in our bed and Kaylee in her bassinet. When Kaylee woke up to eat at night, I’d take her into the living room to feed her and then we’d either fall asleep on the couch or we’d go fall asleep in Zoë’s bed.

Luckily, after the first couple month, Kaylee started to prefer sleeping in her bassinet at night. She sleeps better and longer than if she sleeps on my chest (that was Zoë’s preferred sleeping position for months… actually, I think she’d still sleep there if I let her).

Kaylee is now sleeping soundly through the night most nights. Last night I think she slept for 9-10 hours. She sleeps better than Zoë does (of course Zoë slept through the night up until she was 4-5 months old).

Zoë moves around a lot in her sleep and has nightmares – apparently Brian was the same way as a child. She wakes up a couple times a night crying and needing to be comforted. So, I don’t see myself being a well-rested Mama anytime soon.

Even though I’m still tired most days, I’m happy that we’ve found a sleeping arrangement that works for us. Of course now that we have, I’m sure it’ll change again before too long.

My Little Snugglers
Next Post: Why is There Dirt in the Baby’s Hair?