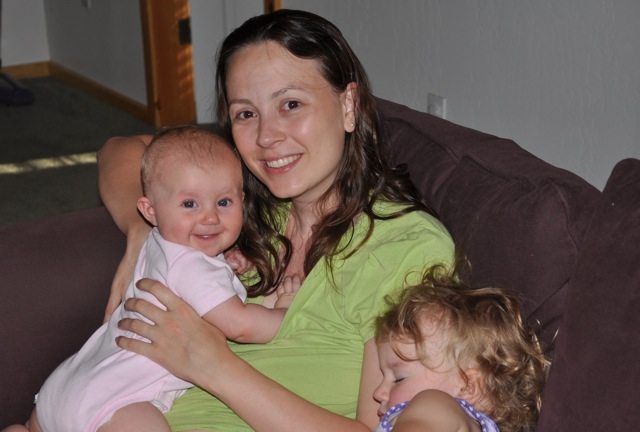 Before Kaylee was born, I wrote about my thoughts and feelings on co-sleeping, and how I wondered what it would be like to co-sleep with two little ones. Then I gave an update on our co-sleeping arrangements after Kaylee was born.

It has been a while since I talked about co-sleeping (Kaylee is already 6 months old!), so I thought I would share how things have changed in our household—and they have changed.

Zoë has decided that she no longer wants to sleep with us. I was a little surprised by that change. However, she doesn’t want to sleep in her room (we’ve tried both a twin bed and a Tinkerbell toddler bed with no luck)… she wants to sleep on the couch.

At first, I felt like a bad parent for allowing her to sleep on the couch. However, after thinking more about it and letting myself get used to the idea, I decided that if that’s where she’s comfortable, then I should just let her be.

When it’s a problem is in the middle of the night when she wakes up wanting Mommy. She refuses to come into our bed, so I have to lay on the couch with her—not my idea of a good night’s rest. Especially when Kaylee wakes up because I’m not next to her anymore.

Kaylee and Zoë have definitely traded roles in that respect. While we were living in Uruguay, Kaylee was sleeping happily in her own bassinet where she could spread out. When we got back to the US 2 months ago, she started sleeping with us since she didn’t have a crib yet.

Well, she got used to sleeping with us and having easy access to mama’s milk at night. So, even though she was sleeping through the night, that’s a thing of the past. She wakes up anywhere from 1 to 6 times every night to nurse. I guess she has decided that I’m her pacifier.

So, we installed bed rail on my side of the bed to make things safer for her to sleep with us. Because even though Zoë doesn’t want to sleep with us, there are some nights where I have to bring her into our bed because both her and Kaylee want Mommy at the same time and I can’t have them lying next to each other or they keep each other up.

Zoë likes to kiss Kaylee and rub her chubby little arms. Kaylee likes to giggle and pull Zoë’s hair. While it’s sweet that they love each other so much, I need a little sleep ☺

So, while at 27 months Zoë has already decided that she is done co-sleeping, at least I still get snuggles from Kaylee every night.

A Binkie-Free Home
Next Post: Adjusting to Life at 7,000 Feet