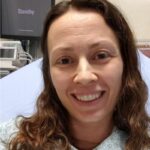 If you’ve been following on Instagram, then you know that I developed a crazy lump in my neck back on March 4 after Brian’s colonoscopy. That night, I noticed I had developed a lump in or next to my thyroid and I had a fever.

The lump was hard and extraordinarily painful. It hurt to talk, swallow, cough and even breathe. It was definitely not what my thyroid felt like before.

The next morning, I called my doctor’s office and scheduled an appointment to come in later that week. After examining me, the doctor was concerned that it was an abscess in my neck caused by a blocked salivary duct because my gland was also sore.

He ordered an ultrasound and some blood work. My white blood count was slightly elevated, but the radiologist couldn’t tell for sure what it was in my thyroid from the ultrasound images. So the doctor put me on Augmentin and asked me to come in so he could try to drain it – he was convinced it was an abscess in my neck.

Thyroid infections are incredibly rare and neck abscesses are serious as well. Most major health systems only see two cases of acute suppurative thyroiditis (a bacterial infection in the thyroid) per year, and 92% of those cases are children. Knowing that, if it was an infection, I didn’t want to mess around so I took the antibiotics and agreed to come in so he could try to drain it.

Brian took me in and the doctor unsuccessfully attempted to drain the lump. It was the weekend, so he told me to go to the ER if my fever kept spiking or if the pain was worse so I could get a CT so they could get a better look at the lump.

My temperature went down some over the next few days, but it didn’t go away completely and the lump was still there. I thought maybe it was slightly smaller, but I wasn’t sure. I was having trouble getting a hold of my doctor’s office, so I ended up heading to the ER to be safe.

The ER re-ran my blood work and my white blood count was back in the normal range. The CT showed that the lump was actually one of my thyroid nodules that had become inflamed. If it had been an abscess, I likely would have needed to be admitted, so I’m grateful it wasn’t. And I’m grateful the doctor didn’t get all the way down into the lump when he tried to drain it since it was a thyroid nodule – that could have been bad.

The ER doctor sent me home and I continued taking the antibiotics and resting and over the next few days, and the lump slowly disappeared. I’m still not sure if I had an infection in my thyroid or if it was inflammation caused by an infection somewhere else, but I’m grateful to be feeling better.

Good News Comes from the Bad

The good news that came from this crazy episode is that I was able to quickly have the new thyroid images sent over to the hospital where my endocrinologist and ENT are. And they were finally able to get my repeat thyroid biopsy scheduled.

Fortunately, I don’t have to wait long. My thyroid biopsy is scheduled for Monday, April 1. That’s kind of crazy because I had my gallbladder removed on April 1, 2017 and that hospital stay is what started this entire health spiral for me. It’s hard to believe that this all started two years ago. Hopefully we are getting closer to having more of the answers we need.

After developing the hard lump in my thyroid, I really started to wonder if my thyroid nodules could be the cause of my dysphagia (read about that diagnosis). So I was happy to have a Barium Swallow Study last week to get those answers.

The study showed that I do not have a physical obstruction. So for now we can only speculate about exactly what’s causing the dysphagia, whether it’s an issue with muscle weakness or nerve damage. Dysphagia is a listed side effect of Levaquin, so it’s likely more damage from the fluoroquinolone toxicity. Hopefully after I have my EMGs in the next few weeks, we’ll have more answers about the extent of the nerve damage so that we can best assess how to work to improve things for me.

I have another busy month of doctor’s appointments ahead of me in April. I have two EMGs scheduled. I have follow up appointments with Neurology, Endocrinology and GI. I see Rheumatology for the first time. And I’m hoping to get to the chiropractor and acupuncturist as well and possibly the dentist. I’m also supposed to schedule appointments for a hearing test and to talk to a counselor about being sick. We’ll see if there’s time to fit that in this month…

I really couldn’t do any of this without Brian’s help. I’m not sure if I’d even still be here without him. He drives me to all of my appointments and makes sure everything is taken care of with the house and the girls and everything else.

I’m grateful to not be in this journey alone, as I’m learning so many people who are suffering from fluoroquinolone toxicity are suffering alone. Their friends, family and doctors choose not to believe that an antibiotic could ruin your health like it has mine. Hopefully my suffering will at least make others aware so people who are suffering like me can be taken seriously and this will stop happening to otherwise healthy people.

Make sure you’re following me on Instagram if you want more frequent health updates. I may or may not post another health update blog post before the end of April since there will be so much to share!

Snowboarding Saved Me from Cancer!!!
Next Post: 6 Best Easy Hikes in Colorado Springs