Home » Family Life » Some Updates are Harder Than Others! 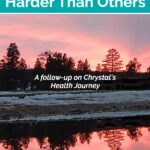 So I was planning on writing this update this past Friday and I decided to do a little more research before posting. And I needed some time for it to soak in. So, I guess there’s no better time than Christmas Eve to drop this one.

Chrystal had the follow-up appointment with the G.I. Specialist this past Friday, December 21st.

I really try not to have expectations for anything… I hope for the best and prepare for the worst. This appointment was different though. I truly expected to have an answer to what is wrong with her. I expected the Doctor to say “We found A, B and C… to treat it we need to do X, Y and Z.”

Chrystal has been pretty much bedridden for the past 5-6 months. She’s out of bed for about a couple hours a day cumulatively. She’s been getting up to get her own water and she’s been making her own tea. The other day she loaded the dishwasher… I heard her clinking around in the kitchen and yelled I was coming and I would handle it, but by the time I got there, the dishwasher was ready to run.

We try to eat dinner together as a family. Chrystal has a hard time sitting up at the table for more than 30-45 minutes tops, so we have been eating on the couch in the front room. It’s just a lot more comfortable for her. We try to watch a show in the evening as a family together. Sometimes it’s in the front room, sometimes it’s in our bedroom and sometimes we take a “raincheck” for family time.

We are amazingly grateful for our lives and so thankful for all of the positivity in our lives. As I said, I truly try to never expect anything from anyone or anything from any situation, but I was truly expecting the Doctor to say they found out what is wrong with Chrystal. That didn’t happen.

When the Doctor came in he had a Fellow with him who was diligently taking notes. The Doctor told us the colonoscopy and endoscopy came back normal. He was really expecting it to be S.I.B.O and he told us the other tests came out normal… with the exception of 2.

So the one test, this is kind of gross and Chrystal may not appreciate I’m sharing this, but once it’s on the Internet it’s there forever so… it’s actually really gross. Chrystal had to do a 3-day fecal test. (Google it if you are curious as to exactly what it is). So what the Doctor said was; a normal person’s GI would have less than 200 grams per day and Chrystal had almost 1,058 grams over the 3-day period, which is almost double normal.

I’ll get to the other test here in a minute.

So the GI Doctor has 2 directions he’s looking at in regards to what he believes is wrong with Chrystal.

One direction is he thinks it could potentially be something dietary. We are going to try to schedule an appointment with a dietitian on Wednesday. Hopefully, we can get into go see one in early January. And we can’t express how much we want it to be something on the dietary end of things. This would be the best thing in the world.

And we’re being very realistic here, we are very concerned it’s not something with her diet. The Doctor seemed baffled as to where she could be losing calories, so he’s thinking that it’s probably not dietary since she doesn’t have diabetes, she’s not losing fat in her stool and her colonoscopy and endoscopy results were completely normal.

Chrystal doesn’t drink alcohol or coffee, she’s also gluten free, dairy free and refined white nothing… very little sugar and only once in a while and she rarely eats nightshades. We eat lots of vegetables, 98% of what’s in our home is organic. We eat extraordinarily healthy and I can’t express how much I hope it’s something on the dietary end.

The second direction the Doctor is looking at is fucking scary. He’s looking at Chrystal’s pancreas and her small bowel.

During the appointment, I straight up asked Chrystal’s GI Doctor “Do you think this is Cancer?” And he was super confident in saying it wasn’t, “No, I really don’t think it’s cancer, it’s highly unlikely… nothing to worry about.”

He said he just wanted to look at her pancreas more in-depth and to check some other hormones in the pancreas. Then he told about a bunch of the imaging tests she’s going to have done.

So, one neat thing about our hospital network is we are able to see test results as they come in and letters back and forth between Chrystal’s doctors. And for as neat as it is, sometimes this causes a lot of anxiety.

I’m not sure if he was telling us a “white lie” to help keep us calm or if he found or saw something after our appointment to change his mind. When we left the appointment, we were for sure disappointed and we were concerned, not scared, that there could be something wrong with Chrystal’s pancreas.

Again, we’re able to see messages between our doctors. Chrystal’s GI Doctor sent a letter to Chrystal’s Primary Doctor saying he believes the diagnosis to be “VIPoma VS Dietary.” Then the letter went out naming VIPoma as a strong possibility. VIPoma is an extremely rare cancer with a scary prognosis.

What that means is, he’s looking to see if she has a Vasoactive Intestinal Peptide (VIP)-secreting tumor in her pancreas.

When they can’t find a cause of diarrhea, they start looking at secretory causes of diarrhea (where your body secretes electrolytes, causing diarrhea). So they are running some tests to see if it is secretory diarrhea, and if it is, they are trying to pinpoint the cause.

Chrystal will be doing a stool test for Sodium and Potassium concentration to see if the cause of her diarrhea is that her body is excreting the electrolytes instead of absorbing them. That could explain why she gets so dehydrated. (She gets super dehydrated fast so we’re constantly having to make she has copious amounts of water and supplemental electrolytes.)

They are also testing her to see if she has elevated VIP levels. If she does, then we may be looking at VIPoma, which is a super rare neuroendocrine tumor that’s malignant over half of the time. Only 1 in 10,000,000 are diagnosed with VIPoma, so we’re super hoping it’s so rare that it’s unlikely. From the letter the GI Doctor wrote to her Primary, it sounds like this is their leading diagnosis now, which is completely unnerving since the last leading diagnosis was SIBO.

If you’re curious for more information, this is what VIPoma is.

The Doctor is also ordering an MRI with and without contrast of her pancreas and small bowel. It’s really hard to see the pancreas on imaging – tumors and damage can get missed on an ultrasound or CT. So they’re being very careful to run all of the necessary tests.

You also cannot see the entire small bowel with a colonoscopy or endoscopy, so you can still have small bowel disease with normal results. The MRI should show them if there are any issues in her small bowel.

They’re also checking her transthyretin, zinc and vitamin D levels (to see if it’s rising with supplementation). They’re also re-running a CBC and Metabolic Panel. The only thing that’s come back so far is the CBC, and it shows her platelets are elevated for the second time in a row. Go Google “high platelet count” and see if that scares you any because we’re scared. We’re not sure when we’ll have all of the results back, hopefully, sooner rather than later.

In addition, after we were almost home… we found other tests were ordered, so we have to go back down the mountain later this week to get them done. We’re all super nervous and scared.

If all of these tests come back normal, the doctor said the next step would be for Chrystal to swallow a video capsule so they can see the inside of her small bowel.

We can’t express how much we want all of these tests to come back normal or for this to be some dietary issue. A dietary issue would be the best thing ever or we would take some type of inflammatory disease or something of that nature over what their leading diagnosis is right now.

We have a follow-up appointment scheduled with the GI Specialist for February 6. In the meantime, we’ll be getting all of these other tests done.

This entire situation is hard

Chrystal is declining and if this is her last Christmas with us, we are so super grateful we have this time together as a family and we’re going to make sure this is the best Christmas she’s ever had.

Merry Christmas and Happy Holidays to all of you and thank you for following our little blog here.

Snowboarding – Broken Bones, Bruised Ribs and a Rail Jam
Next Post: 10 Rules for My Girls – A Dad’s Point of View