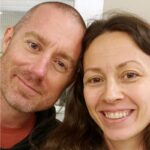 If you’re new to Happy Mothering, I have been going through a health crisis since May of 2018 and sharing my journey since July of 2018. There have been many updates since this journey started. I’ve been admitted to the hospital and have seen numerous specialists over the past year. This has been the hardest thing I have ever had to endure in my life. I hope sharing my journey with you will give you courage to never give up when you’re faced with adversity.

It’s been a little while since my last health update.

I haven’t been posting a lot of health updates on Instagram lately because there hasn’t been much news to report. We’ve mostly been in a holding pattern again until the last week.

Since then, we’ve gotten some news and test results and saw a new doctor, so I wanted to give you a quick update of what we’ve learned, and what’s next.

But first, some good news. I am up to 115 pounds! That’s a total of 16 pounds up from the 99 pounds I was at in September 2018. That is huge because it means that I’m walking just a bit better and having just a bit more energy and endurance. I’ve even made it down to the lake a few times. I know this journey is one of many, many baby steps and I’m so grateful for this small change!

What’s Up with My Thyroid?

If you read my last health update, then you know that I got an infection in my thyroid in March. That was craziness, but shortly after the infection healed, I went in for a second biopsy of my thyroid. We just got the results of the biopsy and it was normal – no cancer. Yay!

The Interventional Radiologist who did the biopsy was able to drain one of my cysts during the procedure. Since then, I’ve had a lot less pressure in the right side of my neck. Unfortunately 2 of the 3 larger nodules are in the left side and they can’t be drained as they aren’t primarily fluid, so I still have a lot of pressure in that side of my neck.

The Barium Swallow Study I had after being diagnosed with dysphagia didn’t show a physical obstruction in my swallowing – just that it was effortful. So we were surprised that when the Endocrinologist looked at the CT images of my neck, she said that it looks like one of my nodules is pressing on my esophagus after all.

She said that getting an infection in your thyroid is very rare as I thought, so that’s why we looked through the images in her office. She ordered another ultrasound to compare with the CT images so we can see if the nodule is causing the dysphagia. That would be a much better cause than muscle weakness, which is what we thought up until that point.

Some good news that we got as she was comparing studies is that one of my nodules has shrank. Hopefully they’ll keep shrinking on their own. Maybe they’ll eventually disappear – something to hope for!

In addition to the ultrasound, she’s running my thyroid labs one more time to see if they’ve changed at all. If everything comes back good on these tests, I won’t need to follow up for a year on my thyroid unless anything changes.

I had an EMG and NCV study on my arms and my legs this month. I was really nervous about it because I had one in 2014 and it’s a very uncomfortable procedure. I had legs done one week and arms done the next, so breaking it up made it a bit easier.

I don’t have copies of the reports yet (we have requested them), but the neurologist went over the basics with us. They showed that my Ulnar Nerve (the “funny bone” nerve) is pinched in both elbows. A little research of my own has shown that it’s a very similar issue as Carpal Tunnel, but in the elbows rather than the wrist. This is why I have pain, tingling, burning, pins & needles and numbness down both of my arms into my hands.

The neurologist said the treatment for pinched ulnar nerves is not resting on your elbows, but I don’t really rest on my elbows. So I’ve been looking into other causes of this particular nerve issue.

From what I’ve read, there are a variety of causes. Everything from arthritis and bone spurs to the nerve slipping out place and getting irritated to bending your elbows when you sleep. I’m not sure what could quite be the cause at this point because nothing really stands out to me (other than sleeping with my elbows bent, maybe?), but I’ve been working on keeping my elbows straight as often as possible.

The other thing the EMG showed in my arms is that it looks like I have neuropathy that is resolving. So I’m hopeful that means there is improvement happening with the peripheral neuropathy in my arms?

The NCV in my legs showed decreased conduction velocity in my Sural Nerves in both legs. The Sural Nerve runs from the back of your knee down around the outside of your leg, then down along the outside of your foot and provides sensation to your two outside toes and the top of your food. There were some other abnormalities with the EMG in my legs too, but nothing specific enough to make a diagnosis. This is one reason why I have constant pain in my legs, ankles and feet and even more pain when I walk. At least we’re getting answers.

The great news is that it doesn’t look like the nerve damage is progressive like my Neurologist originally thought and we originally feared. It was originally a very, very bad prognosis and we’re so grateful we’re not looking at that anymore. We now have hope that it can get better, or at least won’t get worse now.

The bad news is that my Neurologist is referring me to a Neuromuscular Specialist at a different hospital because she feels I need someone even more specialized than her to figure this out. I’m hopeful that they will get me in quickly, but I don’t know yet when I’ll get to see them. Hopefully I’ll have an appointment scheduled by the end of this week.

Even though my GP, Neurologist and Rheumatologist both highly suspect I was poisoned by Levaquin, we can’t say for sure that I have Fluoroquinolone Toxicity without ruling out every other possible cause, so we have to go down every rabbit hole.

I didn’t ask her a ton more questions about the NCV and EMG other than what she went over since she said I really need to see the Neuromuscular Specialist. She said they may even want to re-do the test themselves and that I’m likely looking at a muscle biopsy (and possibly a nerve biopsy if it becomes necessary). So I’m trying not to worry about any of that and take things one day at a time since it’s all speculation right now.

She also ran my Iron and Ferritin levels to check for anemia. My Iron is in the normal range, but my Ferritin (iron stores) is low at 19 (all of the other blood tests she ran were normal). So I need to follow up with my GP to figure out what to do about that.

It’s the first time someone suggested looking at Ferritin because my iron and  red blood count have been normal. The thing is, since I live in the mountains, my red blood count should normally be elevated. So a normal red blood count for me may actually be low! If we can reduce my symptoms by fixing an iron deficiency, that would be amazing. I just want to get guidance from the doctor on the best way to do that given all of my other issues.

First Appointment with the Rheumatologist

The Neurologist also wanted me to see a Rheumatologist, so we had our first appointment with her this month. She was really nice, knowledgeable and thorough from what we could see. She did a very thorough exam and agreed that I do have some muscle weakness and said, “You obviously have Fluoroquinolone Toxicity, I just need to make sure you don’t have an underlying condition that was aggravated by it.”

She ordered sooooo many blood tests. They take up both the front and back sides of a piece of paper. Some of them are repeat tests, but most of them are new tests I’m not familiar with. She’s mostly looking for connective tissue diseases, inflammatory muscle diseases and things like that. Some people who have an underlying condition are more susceptible to Fluoroquinolone Toxicity.

Unfortunately, there are a few of the tests that are likely to give a false positive if you run them after an EMG, so I have to wait a full 8 weeks before I can have my blood drawn for these tests. I wish that could have been better coordinated, but I’m just grateful to be meeting so many doctors who are doing everything they can to get to the bottom of my health issues.

After we get the results from those tests, it’ll give the Rheumatologist enough information to know what we need to do next. She said just because some of my labs have been negative so far doesn’t mean that I don’t have an autoimmune condition. She also mentioned she may need to refer me to an Infectious Disease specialist if she can’t find the cause for my symptoms.

She said another potential cause of symptoms like mine are arthropod related diseases (she also doesn’t think Lyme is likely for those of you tempted to ask about Lyme again!). She’s testing me for some of the more known ones like West Nile, but an Infectious Disease doctor would be the one to order all of those tests if we decide we need to.

Wouldn’t it be amazing if all of this was an easily treatable arthropod related disease and I can make a complete recovery? I’m not going to get my hopes up – just put the positive energy into the universe that it’s something as benign as that.

The diagnosis she has listed for now is Polyarthalgia (basically, pain in most of your joints without inflammation). I’ll see her again in about two months so we have time to get the labs run.

My doctor also had me take a Spirometry test to check the health of my lungs. I declined the bronchodilater portion of the test because the meds they wanted to give me were both on the list to avoid if you have Fluoroquinolone Toxicity. While it was technically considered normal, it said I have the lungs of a 63 year old, so I wouldn’t personally consider that normal.

Well, I think that’s about it – it’s more than I realized it would be! Thank you so much to everyone that has been following my journey, praying for me and sending me positive energy. I’m grateful for each and every one of you.

6 Best Easy Hikes in Colorado Springs
Next Post: Welcome to Our Family Crushes!