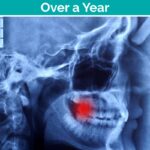 I learned I’ve had a dental infection since at least May 2017 when the dentist missed an infection on the xray! Read why I’m both angry and relieved at the same time.

By now you probably know that I have been extremely sick for over two months now. It has been a wild ride so far, and today’s experience was no less shocking!

I was born with only 3 wisdom teeth. No big deal except for the one without a partner is longer than my other teeth and has broken the molar below it twice.

The first time it happened, I had it patched up and talked to the dentist about having the wisdom tooth pulled. I was told, like I had been in the past, that it would need to come out eventually, but there was no rush. I could wait until it started causing pain.

At that point it wasn’t causing pain, so I decided to hold off on the procedure. The last time it was x-rayed, I had just had my gallbladder removed so I wanted to wait a bit since it didn’t seem like a rush and I needed a break.

So I put it off until it started getting uncomfortable. When I called to make an appointment earlier this year, they didn’t have one available for four months out.

The appointment was scheduled for October, but I was able to get in to have the wisdom tooth removed today because they got a new dentist. With all of the health problems I’ve been dealing with, I wanted to cross one problem off the list.

I was extremely nervous. I have had very little dental work done because my teeth have always been very healthy. I have never had a tooth pulled. I have one filling the size of a pinhead and some patches from tooth grinding.

Brian drove me, because he’s awesome like that. When they called me back, I walked back as calmly as I could and sat in the chair.

How I Learned the Dentist Missed an Infection

The dentist came over and we started talking about my wisdom tooth. She asked me if I was in a pretty good amount of pain?

I told her that today it wasn’t too bad. The pain in that tooth/jaw comes and goes (I was told that tooth floats?) and today was a pretty good day pain-wise.

She then informed me that the x-ray showed a pretty good ball of infection around the tooth.

I have had a dental infection that entire time and it wasn’t caught. She washed it out after removing the tooth and I’m already on antibiotics for my ear.

I feel both a sense of relief and a surge of pure anger at the same time. Relief because maybe this will solve some of my symptoms. Anger because of what this one act of incompetence may have done to my health.

How in the world did the dentist miss the infection if it was that prominent? The dentist I saw today was awesome, she’s not the one who made the mistake, so I kept my cool in the dentist’s office.

I’m not keeping my cool now. How does a dentist miss a glaring infection on an xray around a tooth that we’re specifically talking about? What kind of incompetence causes that to happen?

And now I need more dental work because of it. I have two more appointments. One to fix the broken molar, which I expected, and one to fill some teeth that are now damaged.

I am so angry. I have always have superb oral health and now that is compromised because of incompetence. Not to mention that the infection could be systemic at this point, especially with how sick I’ve been.

I have an appointment set up with a nurse practitioner Wednesday morning so see if she’ll run some labs to make sure that this dental mistake isn’t what triggered this entire health crisis and that I don’t have a systemic infection from all of this. Then we see a doctor again next week to go over everything.

I didn’t think my health story could get much crazier, but it continues!

Have you ever had a dentist miss an infection like this?

Murphy’s Law in Healthcare
Next Post: The Insanity of Our Healthcare System